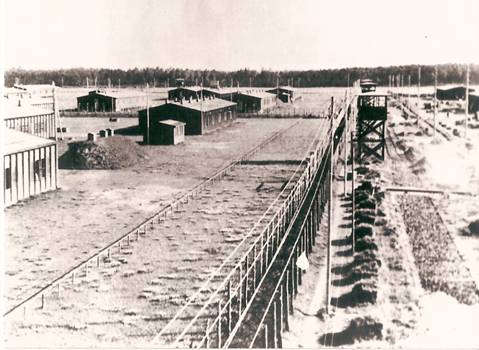 The Macikai (Matzicken) Camps are a unique object of exceptional historical and cultural significance on the national and international scale. It is the only place in Lithuania, and one of the few places in Central and Eastern Europe, where the prison structures of two totalitarian regimes have intertwined. Here, thousands of prisoners were held under appalling conditions, many being condemned to painful death. The history of the Macikai Camps reveals the crimes against humanity committed by the totalitarian regimes of the Nazi Germany and the USSR.

A prisoner-of-war camp established by the Nazi Germany in Macikai Village in 1941 operated until 1944. It was originally called Stalag 331, later on it was renamed Stalag 1C Heydekrug, and still later on, Stalag Luft VI Heydekrug. Soldiers from Poland, the USSR, the United States, the United Kingdom, Canada, France, Belgium, Australia, New Zealand, and other allies were imprisoned there. According to the US Department of Military Intelligence, at least 10,000 people could have been held in the camp.

In 2011, numerous remains of prisoners of war from a Nazi German camp were found under Žaliosios Street pavement in Armalėnai Village. In 2020, archaeological investigations were carried out, with the remains of more than 1,000 people exhumed. The remains were buried next to the old cemetery of the Macikai Camps.

After the second Soviet occupation of Lithuania, the Soviets established in Macikai, the former German prisoner-of-war camp, the following:

The GULAG camp had its branch on Rusnė Island, established in 1951. Approximately 200 people were imprisoned there.

Archaeological excavations of the mass graves of the GULAG period are currently underway.

Today, the Macikai Camp Complex consists of a camp site, a solitary confinement unit, prisoners’ graves, a bathhouse, and, possibly, a barrack building. In 1993, on the initiative of the Šilutė branch of the Union of Political Prisoners and Deportees, the Solitary Confinement Unit-Museum of the Macikai Camp was established in the building of the former solitary confinement unit. As of 1995, it is a branch of the Šilutė Hugo Scheu Museum.

In 2019, the Government of the Republic of Lithuania approved the Plan for the arrangement and perpetuation of the Macikai Camps.